Barely a month after the Governors of the Southwest States met in Ondo State with the leadership of cattle herders over the excesses of some of the herders in the zone, two herders and about 200 cows have been arrested in the state.

The arrest was carried out by Amotekun, the Southwest security outfit following a complain by a farmer at Irese community in Ifedore Local Government area.

The two herders claimed they came into Ondo from Ilorin in Kwara state allegedly attempted to shoot another farmer for asking them to leave his farm.

According to the Ondo Amotekun Commander, Chief Adetunji Adeleye, the head of Fulani group would be invited to identify the cows and the owners for further actions.

Recalled that the Governor of the state, Rotimi Akeredolu, had asked all Fulani herdsmen in Ondo State to vacate forest reserves within the state. He also issued a seven-day ultimatum to the herdsmen.

He gave the ultimatum last month while meeting with leaders of Hausa/Fulani and Ebira Communities in the state.

Akeredolu said the activities of the herdsmen have long been causing a threat to security in the state. 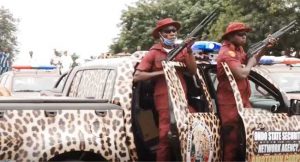