Daniel on Thursday registered as a member of the APC in ward 12, Isote in Sagamu Local government Area.

The former governor who was the Director-General of the Atiku Presidential Campaign Organisation for the 2019 Presidential election had resigned from the Peoples Democratic Party shortly after the election.

The ex- Governor, who was in power on the ticket of the Peoples Democratic Party (PDP) for eight years, resigned from the party in March 2019 after serving as the Director-General, Atiku Abubakar Presidential Campaign Organisation for the 2019 presidential election. He initially said he was quitting politics but later rescinded the decision.

“More than any time in the history of this country, what we need to do is to speak together with one voice.

“Our people have challenges, there is despondency in the land because of security challenges and if anybody is patriotic, this is the time for us to join hands.

“And for us in Ogun state, we have no other choice, we have a good governor and we are determined to support him to succeed”.

Also, Azubuike Ihejirika announced his defection to the APC at his Isuikwuato country home in Abia North Senatorial District.

Prior to his defection to the ruling party there have been speculations that he would contest for the governorship of the state under the PDP in 2023.

Yakubu Shehu Abdullahi, who is the member representing Bauchi Federal Constituency also defected from the People’s Redemption Party (PRP) to the APC. 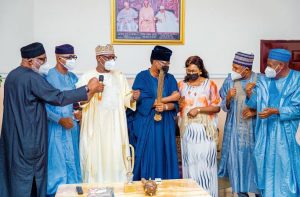