The Southern and Middle Belt Leaders Forum (SMBLF), has condemned the Federal Government reaction to the order given by Ondo state government that herders in state’s forest reserves should vacate.

In response to the rising insecurity in the state, Governor Rotimi Akerdolu had ordered herdsmen in Ondo forest reserves to vacate.

But the Presidency, in a statement by Garba Shehu, the President’s spokesman, kicked against the order.

SMBLF, in a statement on Thursday, described the Presidency’s position on the quit notice order by the state Governor, as a “complete overreach and clear abuse of the constitution in a bid to elevate Fulani herders above the law.”

SMBLF called on the Federal Government to withdraw its unjust order against Ondo government enforcing the vacation order.

“We are supposed to be a Federal Republic and forest reserves in states are fully residual matter to which the Federal Government has no business with.

“The FG’s statement by Garba Shehu that the Governor of Ondo lacks the powers to decide on its reserves in spite of the Land Use Act that vests land in states in the governors was a complete overreach and clear abuse of the constitution in a bid to elevate Fulani herders above the law.

“It is a continuation of the obsessive attachment to Miyetti Allah, like the President instructing Governor Ortom to go and live peaceably with killers after Miyetti Allah killed 78 citizens of the state in January 2019, to prevent Ondo from holding its rights on its reserves in the face of persistent killings of its people by herders occupying the reserves illegally.

“No decent or responsible governor would allow what the FG wants for Fulani herdsmen. The SMBLF therefore asks the Federal Government to withdraw the unjust diktat and allow Ondo to enforce the law,” SMBLF statement read.

Recall that Ondo state government had earlier lambasted the presidency over its position, saying it is a brazen display of emotional attachment and a threat to the corporate existence of the Nigeria. 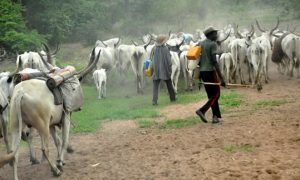 Adesina explains why pigeons released by Buhari refused to fly