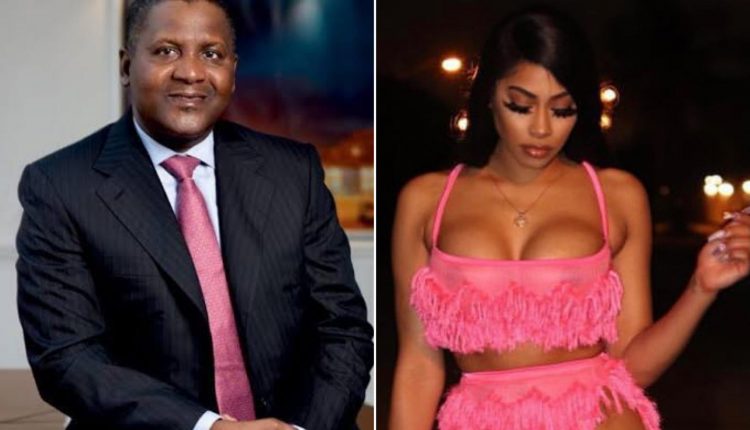 The Africa’s richest businessman, Aliko Dangote has pleaded with United States court in Florida to place a permanent gag order on his ex-mistress, Autumn Spikes over threat to expose his private life and family to talk shows and news media.

Dangote had had romantic affairs with Autumn Spikes for over ten years before the relationship hit the rock on January 1st 2021.

The messy affair started when Spikes had posted a video on her Instagram page with the handle @allrounda1 which showed herself and Dangote sitting on the same couch with part of his buttocks exposed.

Dangote and Spikes have been engaging each other in a messy fight following the end of their relationship, with the lady asking to be paid $5 million by the billionaire businessman as alimony.

Filing the gag order suit on Friday, Dangote, through his lawyer, Bruce Fleisher, stated that he (Dangote) did not “promise to marry Spikes as there was never a marital relationship between him and Spikes granting her the right to a alimony, which is the money a court orders someone to pay regularly to their former wife or husband after their marriage has ended.”

“The defendant has made a claim tantamount to demand for lump sum alimony of five million Dollars ($5,000,000.00).

“Upon knowledge and belief, Autumn Spikes’ claim is that she will expose the defendant’s private life and family to talk shows and news media unless he complies with her demands.”

The document added, “The plaintiff anticipates an onslaught of social media and/or talk show requests with the service of this action.

“The protection to which the plaintiff is entitled is a preliminary restraint before evidentiary hearing.

“Mr Dangote, who said he anticipates an onslaught of social media has appealed to the court to grant him the protection of a preliminary restraint before evidentiary hearing.”

Fleisher confirmed that the petition for entry of the preliminary injunction has been fixed for February 9, adding that the “gag order” was meant to stop Spikes from carrying out an alleged threat to expose the businessman’s private and family life on social media and media talk shows.

“Wherefore, the plaintiff prays that the court enter order of preliminary injunction and order defendant Autumn Spikes to show cause why she should not be the subject of gag order,” Fleisher said.

However, Spikes on her Instagram page, said Dangote offered her a ‘paltry’ $15,000 and $2,500 monthly as well as putting pressure on her to sign the first NDA to ‘hush her.’