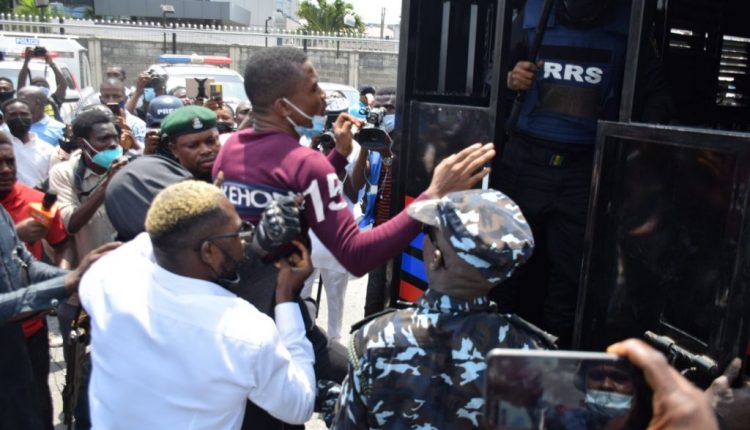 Nigeria police have arrested EndSARS protesters who made good their plan to restage the October protest at the Lekki toll gate on Saturday.

Several Protesters under the hash tag #OccupyLekkiTollgate have convened at the Lekki Toll gate to protest against an order by the Lagos state government to re-open it after it was shutdown months ago.

The tollgate was shutdown following the killing of several #EndSARS protesters by the Nigerian Military.

Reports however revealed that despite the arrest of some campaigners, protesters kept storming the tollgate to register their displeasure at the state government’s directive.

A popular comedian Debo Adebayo, also known as Mr Macaroni and about 30 other #OccupyLekkiTollgate campaigners were arrested. 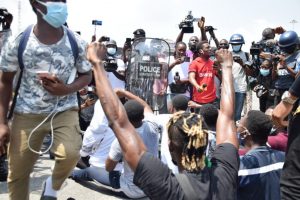 Meanwhile, many prominent Nigerian have condemned the police action and called for immediate and unconditional release of those arrested.

A former vice president of Nigeria, Atiku Abubakar, said the arrest of peaceful protesters is unlawful.

Atiku, in a tweet, cited the 1999 constitution which gave all Nigerian citizens the right to engage in peaceful protests.

Also, an #EndSARS campaigner, Rinu Oduala, has warned the operatives of the Lagos State Police Command that nothing untoward must happen to Mr Macaroni.

She tweeted, “Nothing must happen to Mr Macaroni. The Police will arrest until they get tired!

“Under Buhari’s democracy, we beg for our rights to be recognised. We get treated as slaves and criminals just for demanding for our rights. #EndSARS.” 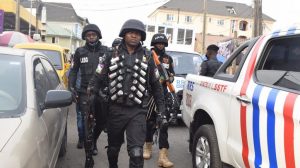 Similarly, Senior Advocate of Nigeria, Ebun-Olu Adegboruwa, has called for the immediate release of protesters arrested at the Lekki Toll Gate

In a statement titled ‘The Arrest, Detention and Dehumanization of Protesters at Lekki Toll Gate Are Unacceptable’, Adegboruwa, one of the members of the Lagos Judicial Panel who disagreed with the decision to reopen the toll, condemned the arrest of the protesters.

“My heart is very heavy,” he said. “I’m saddened and devastated. My soul is sorely troubled at this time.

“For decades before the advent of this administration, Nigerians have risked their lives, liberties, their times and their energies, their resources, to win back this country on the side of democracy and good government, from military dictatorship. Some have paid the supreme price with their lives.

“I have been monitoring events at the Lekki Toll Gate since morning, and I am totally overwhelmed with the images, videos and sundry evidence of police brutality of armless civilians, who ventured to protest at the Toll Gate. In one particular video, I saw citizens of Nigeria being dehumanized, striped half naked and cramped together in a rickety bus. This is totally unacceptable.

“While we are yet to come to terms with the events of October 20, 2020, it becomes worrisome that the security agencies have not learnt any positive lesson from those occurrences. I commend the protesters for their peaceful conduct.”

Adegboruwa added that he was considering exiting the panel.

“I cannot in good conscience continue to sit at any Panel of Inquiry to heal wounds and end police brutality, when fresh assaults are being perpetrated with impunity,” he said. “Consequently, I am presently consulting with my constituency within the civil society, as to my continued participation in the EndSARS Judicial Panel.

“I hereby demand the immediate release of all those arrested in connection with the peaceful protest at the Lekki Toll Gate today. On no account should anything happen to any of them while in the custody of the police.

“I appeal for calm on all sides, in order not to escalate the worsening security situation across the land. I cannot fail to point out the fact that the present administration of President Muhammadu Buhari is a product of protest and civil disobedience. Let history vindicate the just.” 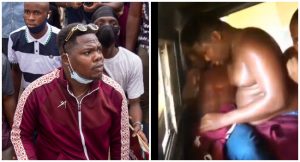 Later on Saturday, a video clip surfaced on social media, of Mr. Macaroni half-naked and sweating in a bus choked with other arrested protesters.

However, reports monitored on TVC said Lagos State Commissioner of Police, Hakeem Odumosu has ordered the immediate release of 35 people arrested during the #OccupyLekkiTollGate Protest.

The protesters had been detained at the Area J Police Command Elemoro, Ibeju Lekki area of the state.

Recall that the Federal Government on Thursday had warned against violence in the planned protest, going further to urge the organizers to cancel their demonstration.